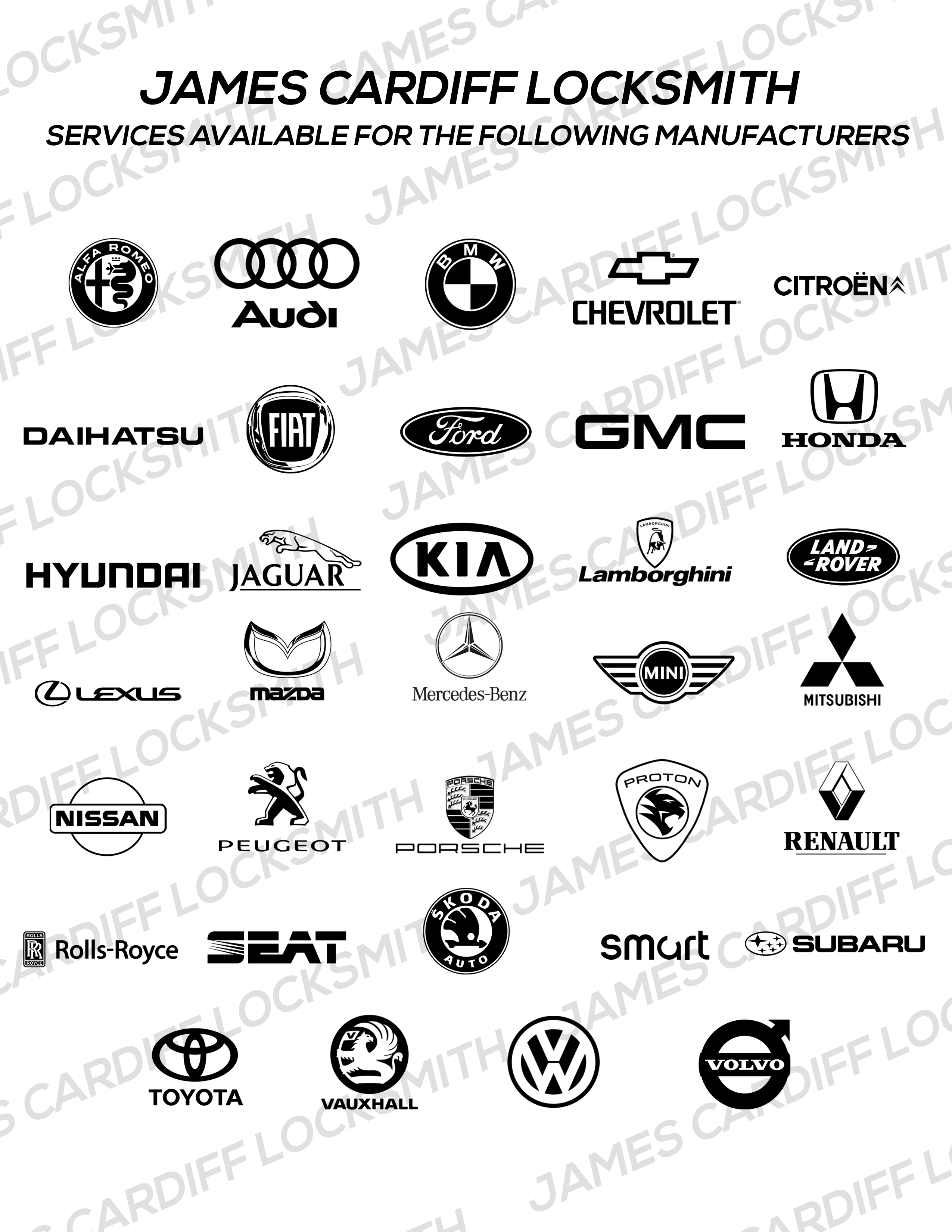 When you have lost your vehicle/car keys or only key, it is a real panic and frustrating time. Here at James Cardiff Locksmith were are here to help, to get to mobile once again and that vehicle turning on the Tarmac.

We can guide you through what is best suited for your needs whether adding a key or a complete lock change would be best suited. When you call one of our locksmiths

If for instance you are in believe that there may be a strong possibility that you may find your keys within a short period of time we sometimes have the function to add in keys to the original system making the old keys still work. Our locksmith key diagnostic devices and software not always gives us this option but on a small number of vehicles we can offer this service. Normally from brand new, the manufacture has two immobiliser keys in the system programmed in. We can then add a third transponder chip into the system giving the total amount of keys in the system 3. If then the key is found it will still work as though the car hasn’t been tampered with by the locksmith. Not always is adding an extra transponder viable and the best way forward if you have lost your car keys.

Deleting of immobiliser Keys from Car

When keys and the transponders need to be programmed into some vehicles there is an  Automatic deletion of the old transponder key immobiliser of some vehicles. A few of the car manufactures which do this include Vauxhall, Hyundai, Kia and many others. Not all makes of manufacturers do this but some newer cars as there is safety in the immobiliser system to say keys not present during programming will not be accepted.

If later the key is found the key will not work and this is no liability to the locksmith as the system only allows us to program a new key in making that all keys are present during the immobiliser coding of the vehicle.

On makes on models of vehicles which doesn’t do this automatically, we can usually but not always delete lost keys from the immobiliser bin file of the car. With our specialist knowledge, software and machinery we can do this on a large vast amount of vehicles. People often prefer our Auto locksmiths to this when programming a new key in for peace of mind.

Deleting of the Remote

When new keys are programmed in alongside the remote, which gets programmed in Automatically. The system will delete out all previous remotes as they are not present while doing a new key and remote programming. The locksmith has no choice over this, and it is the manufactures software schedule that we follow to get the car back on the Tarmac. Not all manufacturers do this, but our locksmiths are seeing this on more and more manufactures software which are on the newer cars.

on most cars, we are capable of deleting the remotes from the car's system and memory. We will advise when on-site at your destination or over the initial call what is best for you and discuss all options. By deletion of the remote, if keys were ever to be found then once pressed on the button would not open the car.

IF Remote is Found

IF we have done a visit to you and deleted your remote and programmed a new one we may have had to do an auto-deletion of existing remotes if they weren’t present. If you have now found your old key but is no longer working this is because it is no longer in the cars memory. This is not our locksmith's fault we can recode a large variety of remotes when they have been deleted which saves costs on a new key. This would be a small charge to pay to discuss please contact James your Auto Locksmith in Cardiff.

Not always is getting the locks to change a more substantial approach compared to having the locks recoded with the existing wafers.

We sometimes can re aliterate the lockset wafers on some vehicle. This often can be cheaper but not always. We do this mainly on the lock to give emergency auto locksmith support to our customers within an instance. Moving the lockset wafers can be a quicker option than getting new locks for the vehicles.  We would have to take out each and every lock of the vehicle which would be the same approach to having the locks changed on the car. After this, we would take them back to our workshop where we would then have to strip down the complete lock to redesign the wafers to give a new key code. Not always do we move all the wafers just enough so that the existing keys can no longer operate the lock.

An example of this is a 10 wafer lock where we have moved over 3 of the wafer from the key code using the same wafers just within a different pattern.

Same lock just with different key code using the same wafer but not longer in the same pattern.

Redesigning of the wafers and stripping them down is a longer approach for labour time than removal and refitting of the locks. Depending on the make and model of the car costs can be higher or lower than having a lock change due to this.

Not always can our Auto locksmiths get brand new locks ordered for vehicles this is due to several factors including one of the main ones which is it is no longer made and that the lock is discontinued due to the car being too old. In this instance, a lockset wafer change is the only option.

What to do if you have lost your car key / Keys

Never ever panic – Panic causes more problems and can lead to mistakes like losing further belongings we know it is easier said than done. But honestly please try your best.

Look for your key – People are often under the belief that as they have lost an item, in this case, the car key they often believe that it is gone forever. A quick check of looking where they have last seen it is sometimes all it takes.

Social Media Ask Others -  Check local social media groups lost and found pages and all speak to surrounding people. People believe other people are dishonest reality is that there is only a small percentage of dishonest people. The majority of people will do their best to help out in a bad situation.

Call Your CAR Insurance or Breakdown – We have seen a lot of insurance cover lost keys even when you don’t think that they were cover this. Its always worth a check for the sake of a phone call which could also cover your other keys such us house lock replacemnents or your office.

Call A Local Auto Locksmith – Were ever you may be in the country you should always try to find a local locksmith rather than the first one that just pops up. Local is always Quicker and we have notice customers are much more satisfied dealing with a local company than one which is miles upon miles away.

If you were driving and your car just decided to turn off, and now it will not start back up, this is not a key or immobiliser issue. An immobiliser will only get used initially to turn the car on. Once the car is started and turned on, the immobiliser will not get used again. The driver of the car would physically have to turn the car off with the key, then once the key is turned and even sometimes taken out of the ignition and placed back in for the immobiliser to be looking for the correct immobiliser code. At no point would any manufacture declare for one of their Cars, Vans or Trucks to turn off while moving from an immobiliser issue. This would be very unsafe and manufacturers have a duty of care to uphold to the customers of their vehicles.

With new proximity key systems. There systems and BSI’s of their cars are constantly scanning the car for the proximity of the key. If the key is left the vehicle while driving, a message will appear, but the vehicle will not shut off as previously stated. It is unsafe when the driver has turned the vehicle off and tries to restart it. The vehicle will prompt that no key is found, so the car will not start back up. Up until the correct key is entered back into the car.

If your driving and your car shut off we will advise you not to call a locksmith but recovery and your car should be taken to a garage of your wishes for further investigation.

Battery Is The Problem

We are often seeing vehicles that don’t start and people are believing an immobiliser is at fault as the car won't turn over and startup. We often say have you checked the car battery and do you have reason to think maybe it’s a battery issue than an immobiliser. People often then believe because the ignition lights come on that the battery is fine.

The ignition lights come on under a low load of 12v which even the flattest of batteries can give. When the ignition is turned over it is the starter motor that needs the heavy load op AMPS to make the car start. This is why the ignition lights come on but the car won't start. Sometimes to distinguish a low battery you might hear the starter motor ticking over which indicates not enough power to start the car. Another sign is to turn headlights on and check to see if they are dim or windscreen wipers and see if they run slow. These can be good signs to see but not indefinite checks. For a more detailed identifier, the best case would be to check the battery under a load tester. This can see if the battery is good or bad.